After months of meticulous planning, they escaped from Fortress NZ. At LA they retrieved and readied the M1163 Growler 4-seater and prepared it for a 1,500 mile, 3 day race across America to the start point of the Yellowstone Trail Convoy in Aberdeen, South Dakota. Two weeks later the convoy arrived at South Bend, Missouri, for the MVPA International Convention.

It was at this event two years ago that they first set eyes on the M-series Growler. This year, their truck was the only one there and most people had never seen one before. It was kind of ironic that the only Growler at the event was brought along by kiwis from across the Pacific!

This is not the boys first rodeo. They have enjoyed several US convoys and been involved in organising three in NZ. Anyone who has been part of convoys, here or overseas, will tell you how addictive they are. No other MV experience is so intense or immersive over weeks. It is an organised tour where you don’t have to worry about travel decisions and each evening the same friendly people are with you. It’s like a coach tour, except you are enjoying it in your own MV!

On the Far North Convoy in 2020, just days before our world changed with the first Covid19 lockdown, we were blissfully free in the far, far north. We had nine American convoy veterans with us.

One day, from our base at Houhora, the convoy headed south to visit Peter Matthews’ private vehicle collection, and his Judith Matthews’ Hanovarian horses. Peter has the northernmost premium vehicle collection in NZ. He is a Ford man, and his collection includes several mv’s. He weakened at one stage and bought a GMC 6×4 that was restored by Sgt Noel Evans. It is reputed to be the last GMC out of the NZ Army. 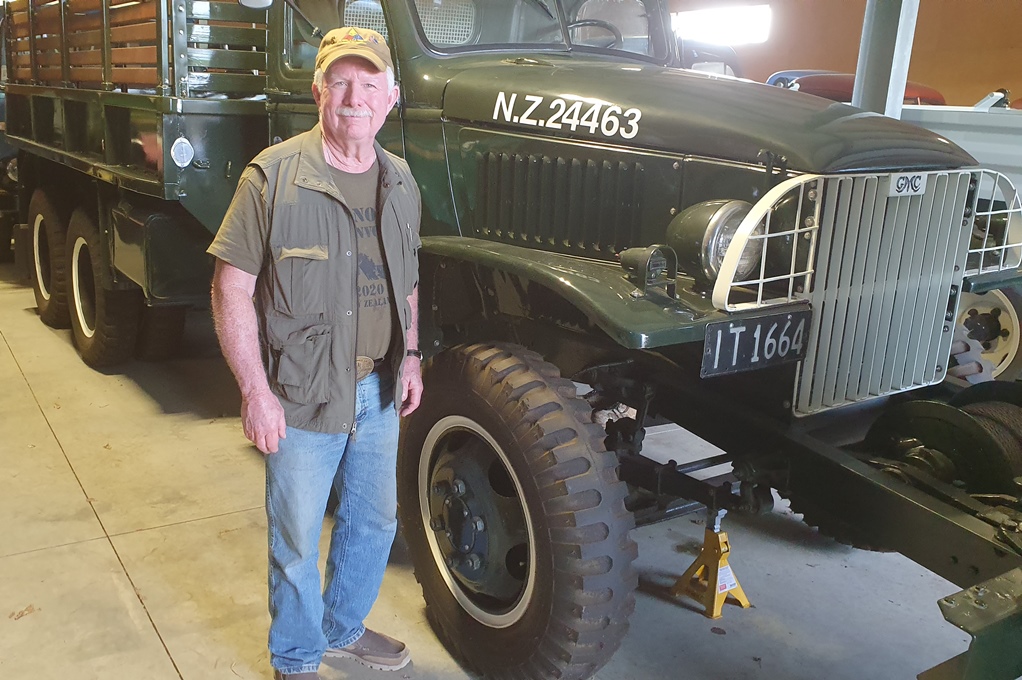 Noel snagged the GMC for his retirement in Houhora. He was a relative of mine. When I visited him in the 90’s I saw the GMC in action with a load of hay on the back. When noel passed, possibly due to Agent Orange exposure, Peter bought the truck. As a self-confessed winch fan, Peter fitted it with a winch, making this truck possibly the only GMC 6×4 with winch in the world lol.

After the visit to Matthews concluded, we motored north to the Waipapakauri Pub. The fighter prop memorial to NZ’s northernmost WWII airfield is outside the pub. We took in some wartime stories before retiring inside for relief from the hot day. The hotel lies beside the wartime runways, and it was requisitioned for the war effort. Initially it was officers’ quarters before becoming the base hospital.

Inside the pub are photos of the airfield construction. The two runways were laid out across the swampy peat. They had to be hardened with clay from the nearby hills. Photos show at least five bulldozers pushing the soil down to chutes to load onto a fleet of a dozen Dodge tippers.

If you travel north of Kaitaia, past Waipapakauri, there is a concrete structure beside the SH1. This was the airfield command bunker. Due to the swamp, it could not be conventionally buried but instead it was built above ground and then covered with sand. It is basically a rectangular room with two entry passages, which continue past the room for blast absorption. It was lined with T&G timber.

The Matich family own the land and hosted our visit to the bunker. The matriarch stopped by as we visited and shared her memories from when she was a young girl. During the war, their land was taken for the war effort. The large family had to leave their near new house and instead were allocated a smaller old house that had been used as a hay barn. They were there for several years before finally being allowed back home.

Coincidentally, the first Bren Carrier that I ever saw came from the Matich farm. Dennis Hewitt had retrieved the carrier and another club founding member, Lance Paganini had it at his Kerikeri farm when I saw it. It looked awesome racing down the gravel county road, speeding around the bends in a cloud of dust and smoke.

At the conclusion of the command bunker visit, precisely at the prearranged time of 1pm, a flight of four Tiger Moths flew over the former airfield at only 800ft. The planes were on their 50th anniversary Far North air safari. It is amazing how many stories came together that day on the convoy.

Now we are all anticipating the joy of travelling together once more on the Far East Convoy 2022. The recce team have checked out the route, the stops, the attractions, and the logistics for this 2,000km odyssey that will unfold over two weeks next February.

You are invited. You don’t have to spend thousands of dollars to travel to Midwest USA, or quarantine for two weeks when you get back home. The authentic convoy experience is available right here in fortress NZ.

Join us and get addicted!  Find out more here.

A personal history of serving at Waipapkauri here

The SS Patrick Henry is launched, becoming the first of more than 2,700 Liberty ships.

SS Patrick Henry was the first Liberty ship launched. It was built by the Bethlehem Shipbuilding Corporation at their Bethlehem-Fairfield Shipyard in Baltimore, Maryland. She was named after Patrick H...
View Comments

When this happens, it's usually because the owner only shared it with a small group of people, changed who can see it or it's been deleted.
View Comments

Splendid - So few left operational around the world too

Bought several years ago, did quite a bit of restoration. All timber work done, requires quarter panels. Starts and drives but incorrect engine, correct engine and new gearbox will be supplied with ve...
View Comments

When this happens, it's usually because the owner only shared it with a small group of people, changed who can see it or it's been deleted.
View Comments